/ Save snow
How can we ensure an early opening even if the cold shines with its absence? The weather is a factor that we unfortunately can not influence, but with produced snow, which consists of air and water, and by saving snow during the summer months, we can even in poorer winters guarantee an early opening and skiing for our guests. Here we tell you everything you need to know about how, why and when we save snow.

Surely it would have been nice if the natural snow came perfectly to the premiere date every year and if the cold was a guarantee in the same way that the sun rises every morning? But that, as you probably understand, is not the case. And the fact is that natural snow is not always the best way to go in our Swedish climate. A mixture of produced snow, which has a higher density and is significantly more durable, and natural snow creates the optimal conditions for skiing. But even for us to be able to produce snow, cold is required. How do we eliminate factors such as weather and wind so that we can open as planned? There is a simple answer - by saving snow. In Kungsberget, we therefore always try to be at the forefront and take advantage of all new research that exists in both snow production and saving snow - so that our guests will have the best possible experience on the ski slopes, regardless of the weather.

We save all the snow that is left
As soon as we close for the season, the work to save snow for the next ski season begins. All the snow that remains is excavated and formed into large piles, reminiscent of the shape of a loaf, of about 10,000 cubic meters. The mounds are placed in strategic places, usually just above the place where the snow should be, so that we can quickly and easily get it out on the slopes again as winter approaches. But how can the snow remain in the summer heat? Does it not melt away? Of course, we can not stop melting completely, but we can slow it down.

The snow is covered with geotextile cloths
To make the melting slower, there are different materials to cover the snow with, everything from wood chips and shavings to bark. In Kungsberget, we use so-called geotextile cloths, which have a Goretex-like function. When covering snow with geotextile cloths, two cloths are usually used, which we also do in Kungsberget, but a few years ago we tested to also place insulation between the cloths and the result was far better than we could have expected. The meltdown decreased by about 10 percent and the technology is still used today.

A perfect foundation
When autumn comes, it is important to be on your toes all the time and follow the forecast for when the cold seems to come. About two weeks before the predicted cold, the snow is uncovered and preparations for excavating it on the slopes begin again. Because the saved snow has accumulated, it has a significantly higher density than natural snow and also newly produced snow. The fact that it has a high density means that it is very durable, which makes it a perfect foundation on the slopes that lasts a long time. 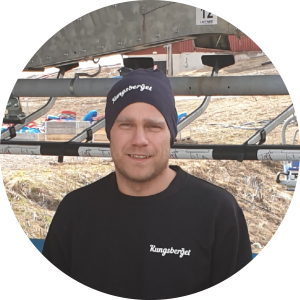 Why does Kungsberget save snow?
- The biggest reason is that we can guarantee an early opening so that our guests can plan their skiing holiday well in advance. We have enough saved snow to be able to open slopes on just that snow, but above all the saved snow is a good and durable foundation, thanks to its high density.

How much snow does Kungsberget save?
- It can vary from season to season, but we usually lie somewhere around 100,000 cubic meters. We produce snow during the season as soon as we get the chance and the colder it is, the more we can produce and save. If there is also a lot of natural snow and the cold persists, it can also remain and be saved when the season is over.

How much snow is left for next season?
- It can also vary from season to season, depending on the weather and wind during the summer months. But we are very careful in our work to cover the piles and therefore it does not have much impact. On average, about 60 percent of the snow is left when we go out with it on the slopes again, but when we excavate it, we get air in the snow and in this way we can cover more of the ski slope. You could see it as when you puff a pillow or a duvet. When it has been lying around for a while, it is collapsed and heavy, but when you shake it a little, it becomes bigger and lighter. 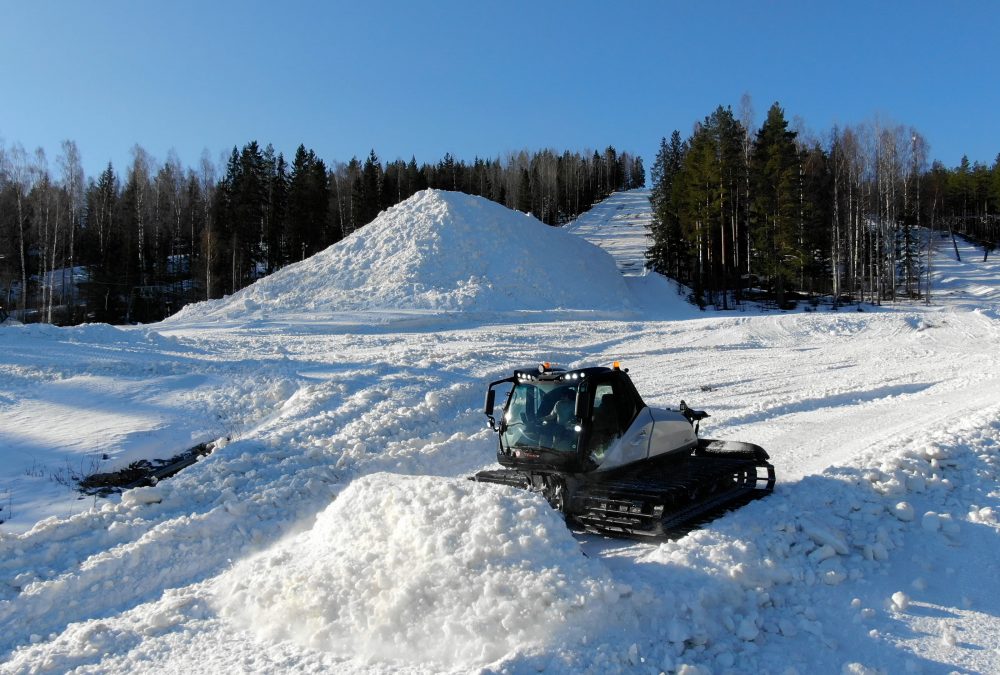 This is how we save snow in Kungsberget in five steps

Step 1 - Place the snow in the right place
Immediately when the season is over, we excavate the snow that remains in large piles in strategic places where they can easily be excavated out on the slopes again.

Step 2 - Create the perfect shape
The piles are formed into large and smooth "loaves" to prevent water from lying on top, which can eventually run down and melt the snow.

Step 3 - Cover the snow for the summer
We cover the piles with three layers - a geotextile fabric, followed by insulation and finally another geotextile fabric. When it gets hot, the snow melts and water evaporates under the cloth, which creates a cooling effect that makes the melting slower.

Step 4 - Uncover the snow as winter approaches
When the forecast shows that the cold is approaching, we cover the snow so as not to risk the canvases freezing. After the summer months, about 60 percent of the snow remains.

Step 5 - Excavate the snow on the slopes again
During this process, we get air into the snow, which increases its volume. We can cover larger parts of the slopes and thanks to its high density we get a perfect foundation that lasts a long time.

Keep track of all the exciting things that are happening! Subscribe to our newsletter and take part in news, promotions and all the other fun that is going on.